How to Run Thru a Michigan Winter Without Killing Yourself 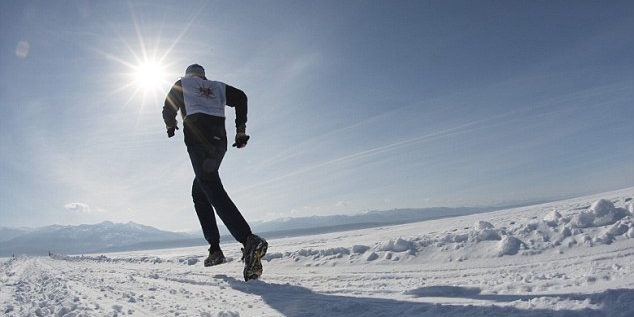 If you’re anything like me, you’re stuck here in Michigan at wintertime with an insatiable running habit. Just like a child who wants a toy only after she can’t have it, Michiganders’ longing desire for a nice, long run intensifies when we cannot obtain it. Why? Because it’s friggin’ cold as hell. When it’s not cold as hell, it’s so damn icy that we risk breaking our collarbones with every step. Our favorite running paths are dead to us. Daylight graces us for a fraction of the day, seemingly while we are at work or school. All is lost…or is it?

Running in the Midwest during winter is like the Newton Hills section of the Boston Marathon.

I think Boston is a fast marathon course, except for the section of road from 16 to 20 miles: Newton, Mass. Everyone likes to freak out over this part of the course. It’s a series of 4 big hills, which get progressively bigger and harder as you go. My coach, Kevin Hanson’s advice for this section: “Manage Time.” What exactly does he mean? Kevin is saying, you are going to slow down. You’re going from running a gradual downhill for 16 miles to climbing 4 monster hills back-to-back-to-back. Maintaining your previous pace is either impossible, or the effort required to do so will sabotage the remainder of your race. The way to approach Newton is to “just get up ’em”. Don’t panic. Don’t press. Just get up ’em with losing as little time as possible. Don’t ruin your race by killing yourself up those 4 hills, “Manage Time.”

1. Don’t Get Injured: If you can simply make it to the Ides of March without pulling your hamstring, slipping on ice and breaking your elbow, or suffering any other plethora of miserable injuries people risk by overdoing it in the winter; you WIN. The last thing you want to do is be injured ahead of the first nice day of spring. Get through March 15th healthy, and you are already in a better place to capitalize on the cool spring weather, which is ideal for distance running.

2. Get Healthy: A large percentage of runners have some minor lingering injury issues left over from their fall racing exploits. What better time to let that Achilles tendon or sore hamstring heal up? If you neglected to take adequate rest after that fall half-marathon you ran, now is the time to rest it for an entire week! If it’s something more serious, get in and let an expert take a look at it for you. Get it taken care of now so you are ready to roll when the snow melts!

3. Slow Down! Almost every running injury I see in my office can be traced back to an ill-advised speed work-out or a race the runner was not adequately prepared for. Most of us know the value of a “base phase,” where we slow down and just get the miles in. Wintertime is perfect for such a base-building phase. Give yourself permission to just get the miles in. In fact, one trick is to stop logging miles, instead run for time. Run for 60 minutes. Don’t worry about how far you ran or didn’t run. The reality is that you are the only person who actually cares anyway. “You are not your pace-per-mile. You are not your bleeping khakis!”

4. Lower your Expectations: Don’t set a goal of running everyday. Don’t get mad if a storm hits the morning you planned a tempo run. If you’re crazy enough to try to race in the dead of winter, don’t expect to run a PR. Expect the weather to only get worse; then, if we get a nice day in February, it’s a gift! Winters in the Midwest vary in intensity! Cherish the nice days; don’t curse the bad ones. After all, it’s WINTER!

5. Find an Alternative: I should have my mouth washed out with soap for this one. I have recently discovered there are other forms of exercise. It may even be beneficial to spend an hour on a bike trainer or in the pool at the gym. Nordic skiing is awesome. I’ve never tried snow shoes, but it sounds like fun. Anything you can do to get yourself to March without turning into a fat blob should be considered! Remember, MANAGE FITNESS!

6. Get the Hell Out! Newsflash: There are places in this county within driving distance that have much milder winters! If you have the means, get yourself to Florida for a 4-day weekend. Run a race down there, or just get some good runs in. If funds are sparse, try driving somewhere like Louisville, KY. It’s a 5-hour drive from Detroit and you can expect low 50’s during the winter. Plan yourself a trip to see that long-lost great aunt in Arizona. Crash her place and run yourself silly for 3 days. It will get you closer to March.

7. Plan Your Year: When it’s dark all day, it’s a great time to log into Al Gore’s inter-web and sign up for some races! Plus, if you sign up early, you can do one of those rock-n-roll races for less than $200. Take the time now to really plan out your year. My advice is to plan to peak for a late-spring or early summer race (for me it’s Grandmas Marathon in Duluth, MN); then, regroup and target a fall race. Splitting your year into two halves allows for proper “periodization.” That’s a fancy coaching term which would be a great future blog topic!

8. Get Yourself the Gear: To run during the winter, there are some key pieces of gear that you NEED. For me, it’s wool socks, wind briefs, 2-layers of gloves, and a wool hat. I’ve always felt like the running shoe companies come up a bit short when it comes to making sub-zero temp gear. I’ve bought neoprene hunting masks to keep my face from freezing when the windchill is -30F. I’m issuing a challenge to the running industry to start making some gear that will hold up to extremes. I’ve never found a single pair of running industry gloves, hats, or socks that can keep me warm by themselves when the windchill is -30F. Doubling things up is still where it’s at.

9. Forget the Yaktrax: Back in the day, I would take hex-head sheet metal screws and screw them into my running shoes so I didn’t kill myself on the icy roads around here. Forget that! If the roads around you are so icy that you need Yaktrax, it should be a signal that you shouldn’t be running on them! Seriously, find me somebody who does a lot of running on ice with Yaktrax and I will show you somebody who has fallen on their ass while wearing Yaktrax.

10. Save the Motivational Matches: Competitive cyclists have terms they use when describing their races. They talk about having a limited number of “matches to burn.” Meaning, in a race, each rider can only attack (or cover a move) a limited number of times. Once they burn their last match, they’re done for the day. When it comes to motivation, runners have the same limited number of matches. Sure, anybody can get out of bed at 4 AM and run a speed workout on a snow-covered track with a windchill factor of -30F. It can be done—once, maybe twice. I would prefer the runner save their motivational matches for times when they can reap maximum benefit. Save that match for the hard 20 miler a month before your spring marathon. Save a motivational match for the 10 x 800M on the track in April. Learn to pick your battles wisely.

The 5 Psychological Stages of a Running Injury
March 1, 2015